Get to know the Cultural Heritage Ecosystem in Romania

Get to know the Cultural Heritage Ecosystem in Romania 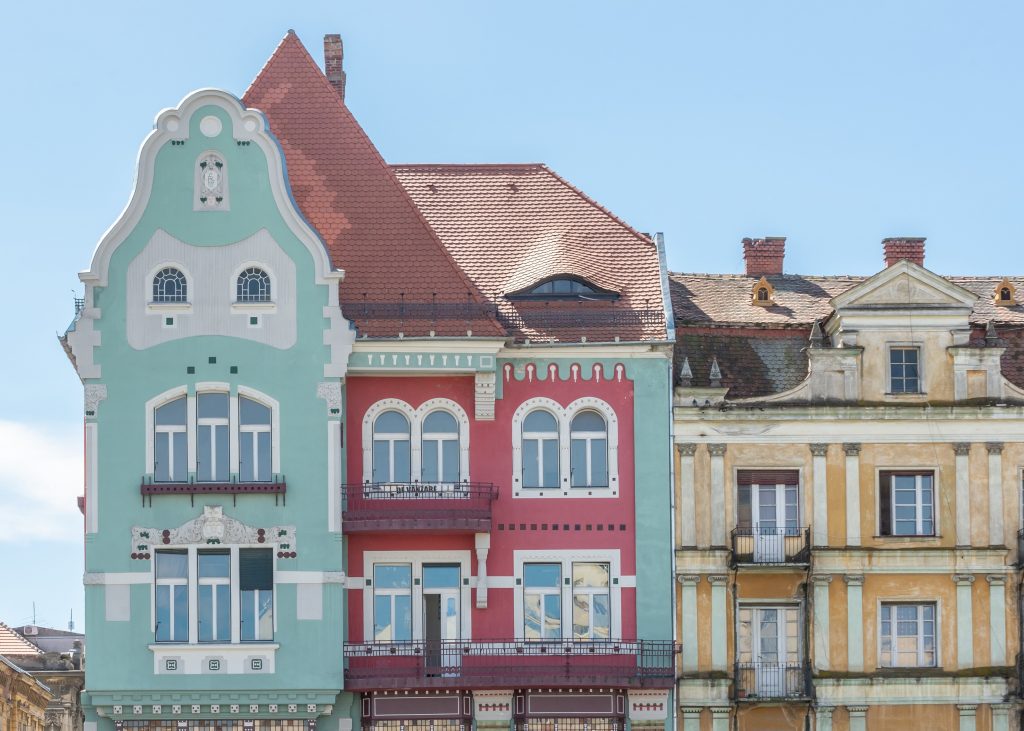 In preparation of the CHARTER workshop The Diversity of the Cultural Heritage Landscape(s), which took place online from 21-23 June 2021, the hosting organisation National Institute of Heritage Romania put together an overview of the Romanian cultural heritage ecosystem. It was presented to the other project partners during the workshop and was later turned into an article for an even wider reach.

Cultural heritage in Romania is a very diverse one, both in matter of time span, and cultural particularities. This complex cultural heritage is closely connected with the history of the country, which has, over centuries, been part of various political and cultural structures. Today, Romania has over 30.000 listed historical monuments, and eight UNESCO World Heritage properties (six cultural properties and two natural ones).

Romania started establishing its first institutions meant to manage and present cultural heritage in the 19th century. The first public museum – The Museum of Natural History and Antiquities – was established in 1834, followed by the Antiquities Museum in Bucharest in 1864. For immovable heritage, the first provisions for the protection of historic monuments came with the K. K. Central Commision zur Erforschung und Erhaltung der Baudenkmäler, established in 1854, which surveyed the regions that were then part of the Habsburg Empire, and with the first Romanian Law on the conservation and restoration of public monuments, in 1892.

These institutional and legal frameworks merged after 1918 and underwent changes throughout the 20th century. Sometimes, these changes have been dramatic, when political systems changed dramatically as well: once with the advent of communism, after World War II, and again in 1989, with the Romanian revolution. Both moments meant radical transformations within society, with severe impact on the entire cultural heritage system as well.

The current Romanian legal framework has been established in the early 2000s and deals separately with three main types of cultural heritage: immovable, movable and intangible, establishing distinct categories within each. Digital heritage is yet to be defined by law, but it is nevertheless part of the mission of the National Institute of Heritage Romania.

This framework also comprises international law, through the conventions which Romania has ratified. In terms of European conventions dealing with cultural heritage, Romania ratified all conventions, except for the Faro Convention on the Value of Cultural Heritage for Society. Thanks to the adoption of the European Landscape Convention, landscape has been introduced in our legal system, but this has not been detailed into further legal instruments yet.

The implementation of the cultural heritage framework rests to a large degree on the National Institute of Heritage Romania. For each category of heritage, there are also dedicated advisory bodies and specific institutions. The following diagram offers an overview of the various actors and the relationships between them. 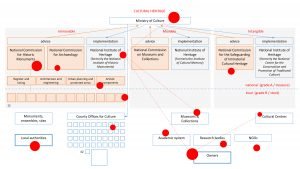 The institutional framework of cultural heritage protection in Romania.

Within this section, we will focus on staff, funding, and knowledge and how these resources are used throughout the Romanian cultural heritage ecosystem within the public, private and academic sector.

The public sector has seen a drastic drop in staff in the last years, while wages still remain low and training remains insufficient. For example, the National Institute of Heritage Romania lost half of its staff in the last decade. These factors contribute to the system’s lack of attractivity for new employees, and lack of motivation for existing ones. The challenges in the public sector affect whatever happens in the private sector – business and non-governmental. The heritage business sector is also threatened by insufficient staff, which is also insufficiently trained and unstable, with ever-rising emigration. In the case of the nongovernmental sector, staff is often well trained and motivated, but hard to stabilize because of the lack of other resources. Unlike other European countries, most Romanian heritage NGOs are run by a small group of people on a voluntary basis. The academic heritage sector is also understaffed.

In the case of funding, the public sector is severely underfinanced, but EU funding is compensating, with relatively large resources, which are nonetheless accessible through restrictive procedures, and are also only to a small extent adapted to specific local market features. In the business sector, although funding is also shrinking, we are seeing an increasing mobilization of funding through Corporate Social Responsibility programmes. NGOs remain chronically underfunded, but this is partially compensated through flexibility and creativity. The academic sector is also characterized by underfunding, with small exceptions for top research.

In terms of knowledge, the public sector faces a shrinking body of knowledge and personnel able to create and manage knowledge. The private heritage sector is also shrinking in specialized areas, and even endangered in the case of traditional crafts. The nongovernmental sector mixes both professionals and amateurs, and partnerships with state institutions are becoming more frequent. In the academic sector, we have witnessed the loss of postgraduate programs in architecture conservation and this has led to a knowledge crisis in the field. The one exception is the field of art conservation, which is developing. 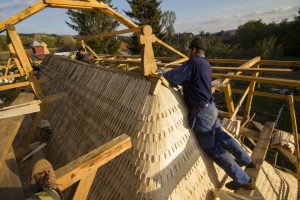 Craftsmen laying new wooden shingles for the roof of the Orthodox church in Urși. This wooden church, found in the cemetery of a small village, has been carefully restored with the close involvement of many partners including the local community, and was awarded the EU Prize for Cultural Heritage this year.

Currently, Romania is gradually embracing a more participatory approach to cultural heritage, transitioning from a system based on the mid-20th century theory and practice, which is expert led, top-down, institutionalized and centralized. We are moving towards a more decentralized and flexible system, capable of addressing the needs and priorities of communities. We are hopeful that we will be able to persuade our Government to take the necessary steps to ratify the Faro convention and continue in the effort to build a more functional and adequate ecosystem of cultural heritage in Romania.

The protective structure of the Costești-Cetățuie dwelling-tower (pictured above) has recently been rebuilt through joint efforts from a variety of stakeholders: the National Institute of Heritage Romania, the Ambulance for Monuments, the Dacian Fortresses of the Orastie Mountains Archaeological Sites, the Babeș-Bolyai University, The National Museum of History of Transylvania, the Hunedoara County Council and the Orăștioara de Sus local authorities). The site is part of an UNESCO World Heritage property.